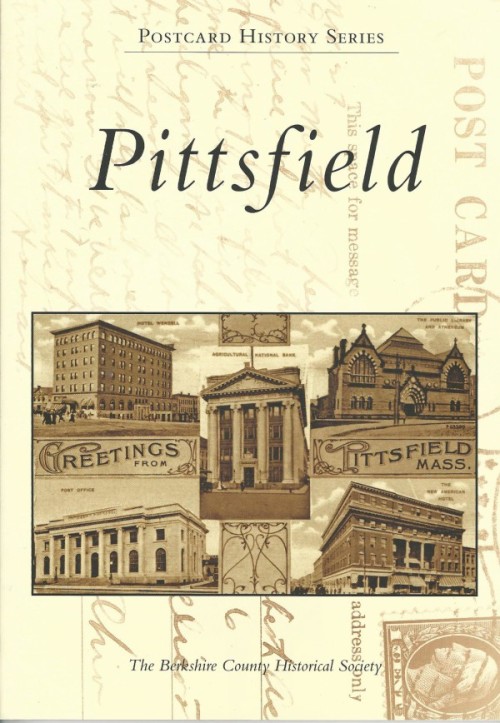 Over 200 postcards depicting the history of Pittsfield, all in one handsomely printed book! Volunteers at the Berkshire County Historical Society combed through the thousands of cards in our collection, conducted primary research, and wrote the captions.  Stop by Arrowhead to purchase your own copy, or shop on-line on our website.  The cost is $21.99; proceeds support the programs of the Historical Society. 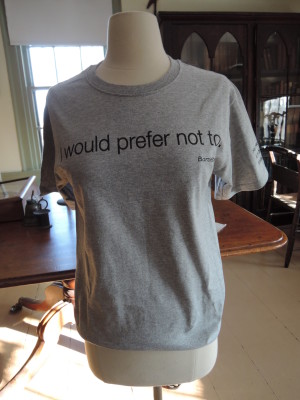 We hope you can visit the museum shop at Herman Melville’s Arrowhead this season to browse our books, clothing, and gifts. But if not, never fear!  We have a few items on-line  And feel free to call if you’re interested in other merchandise, such as  The Complete Illustrated Edition of the Wreck of the Whale Ship Essex by Owen Chase.

Owen Chase was the first mate on the ill-fated American whaling ship Essex, which was attached and sunk by a sperm whale in the southern Pacific Ocean in 1820. This edition of his book is filled with art, photographs, maps, and artifacts. 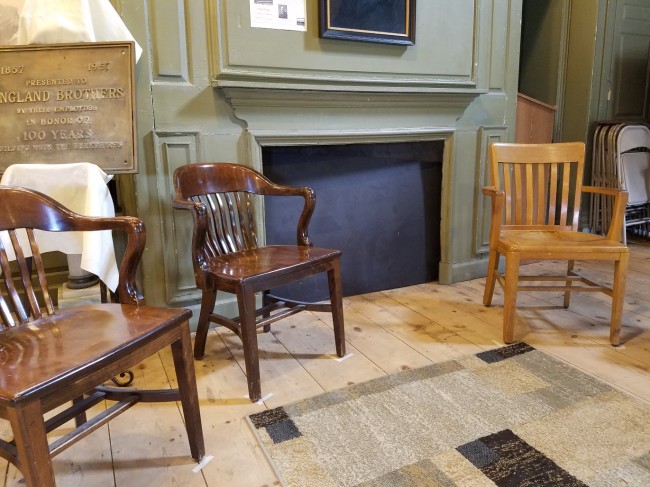 MELVILLE. . .ON THE LIGHT SIDE, a new play by J. Peter Bergman and Herman Melville
In a teacher’s lounge at a small college five men and women meet to discuss Herman Melville, his life and his work. In examining their favorite subject they bring life to excerpts from his works, including “Moby-Dick,” “Pierre,” “Bartleby, the Scrivener,” Israel Potter,” “Billy Budd,” “Redburn,” “I and My Chimney,” poems from “Weeds and Wildings,” “Battle-Pieces, “Bridegroom Dick” and a narrative poem recently attributed to Melville. The voyage of discovery exposes the less psychological, less gloomy side of the author providing a more human and humane look at his generous output.   The performances are over, but we hope to bring this play back in the future. 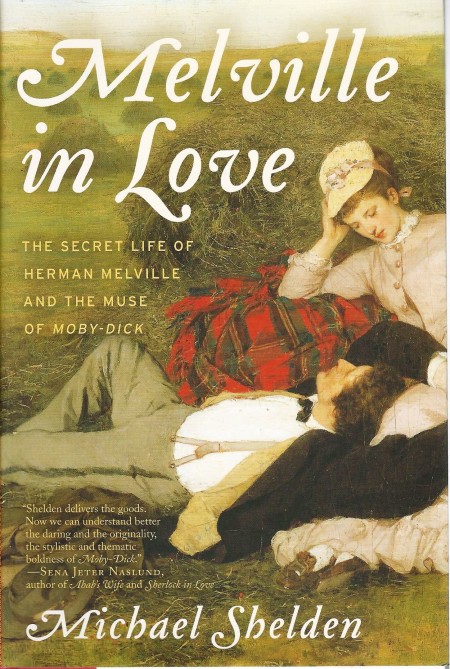 On August 17 in the Red Barn at Herman Melville’s Arrowhead, author Michael Shelden talked about his new book “Melville in Love.” This biography discloses the secret affair Melville had with his neighbor, Sarah Morewood who served as his inspiration for at least one major character in his novel “Pierre, or The Ambiguities” and helped birth the now classic American work of fiction, “Moby-Dick.”

This program was presented by the Berkshire County Historical Society, which owns and operates Herman Melville’s Arrowhead as a historic house museum. The book is available to purchase in the museum shop.

As much a biography of Sarah Morewood as of Melville, the book offers a new look at a known friendship along with insights into the nature of the author’s production of his books. Also an inspiration to the works of Dr. Oliver Wendell Holmes, a neighbor of both Melville and Morewood, she played a major role in the growth of women in the creative workplace writing and publishing her own poetry in a time when women were generally disregarded in that field.

Shelden, a professor of English at Indiana State University, is a well-known biographer, principally for his works on Mark Twain and the early political years of Winston Churchill. The talk, with a q & a afterward, should be illuminating, not only on its subject matter, but on the methods used by biographers in constructing the stories they tell in their own books.

For information contact the Berkshire County Historical Society at 413-442-1793 x14. 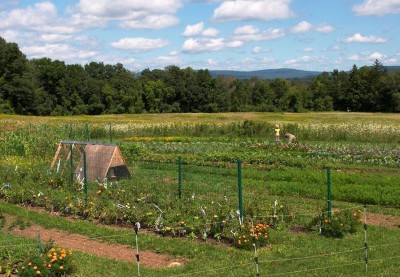 Although the CSA farm at Arrowhead is not open this season (2016), last year’s recipes are still available:

We suspect that Peter made up this word. However, the recipe is terrific, and uses up a lot from your farm share! Cucumbatouille

A scrumptious recipe for all the Swiss chard coming off the farm. Swiss Chard recipe.      Thanks to DannyBoy of the Internet.

Peter is back with a nice recipe for broccoli soup – good hot or cold. Pictured are the broccoli plants at the Farm.  broccoli soup

Jana’s Delicious Raw Kale Salad!  Jana Laiz, Arrowhead’s Writer-in-Residence, says, “This is a dish I invented and I now eat so much of it, I might be part kale.”  Give it a try!  kale salad

This recipe for turnip gravy is sweet and delicious!  Click here for the recipe: turnip gravy 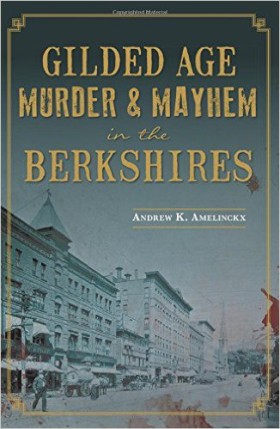 Recently, author Andrew Amelinckx visited to discuss his new book.  Murder and dark deeds shadowed the extravagance of the Gilded Age in the Berkshires of Massachusetts. In the summer of 1893, a tall and well-dressed burglar plundered the massive summer mansions of the upper crust. A visit from President Teddy Roosevelt in 1902 ended in tragedy when a trolley car smashed into the presidential carriage, killing a Secret Service agent. From axe murders to botched bank jobs, author Andrew Amelinckx dredges up the forgotten underbelly of the Berkshires with unforgettable stories of greed, jealousy and madness from the Gilded Age. 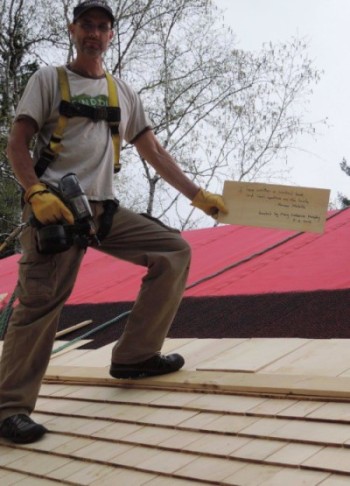 We’ve put a new roof on the main house Arrowhead! You still have an opportunity to be a permanent part of Herman Melville’s farm! Buy a new shingle, put a quote – or just your name – on the back. When we raise the funds to re-roof the historic barn, we will install your shingle.  Details – $15 for signature; $25 for signature plus quote. For $5 extra you can have as many old cedar shingles as you can carry in one armload! Call 413-442-1793 x11 for more details.  If you can’t stop by in person, please use our PayPal account.  Please contact Will Garrison with details of your name and quote.

There are many volunteer opportunities at Arrowhead.  Gives us a call to learn about all the activities at the Historical Society and Arrowhead. These include giving tours of Arrowhead, working in the museum shop, and grounds maintenance.  Location: Arrowhead, 780 Holmes Road, Pittsfield.  Bring a friend!  Call 413/442-1793 x10.  Training provided. 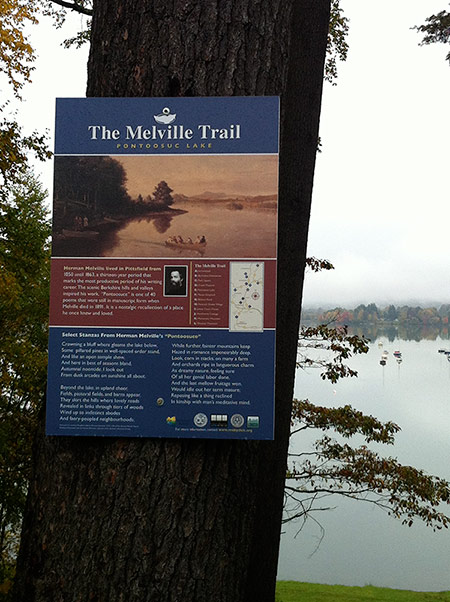 The Melville Trail highlights twelve Berkshire sites that either were important to Melville or are repositories of information about Melville and his life. The sites are Arrowhead, Pontoosuc Lake, the Berkshire Athenaeum and Monument Mountain, all of which display permanent interpretive panels; and Park Square, Hancock Shaker Village, the Crane Museum of Paper Making, Balance Rock in Lanesborough, the Lenox Courthouse, Tanglewood and the Hawthorne Cottage, October Mountain and, of course, Mount Greylock. The Trail was officially opened in October of 2014. A brochure about the trail can be found at Arrowhead and the Berkshire Athenaeum, or HERE

Although Melville’s work belongs to the world, it was the Berkshires that inspired him.

Poetry Workshop: A group of carefully selected poets is meeting monthly at Arrowhead, using a series of challenges to create new works. The hope is that a chapbook of new poetry by this group will be published. Run by J. Peter Bergman, the group project will wrap up with a public reading in June.

2021/2022 Winter Season:
Tours are available by appointment only. Each tour is limited to TEN (10) visitors.  Please see our Hours and Admission page for more information.