In the summer of 1850, Herman Melville impulsively decided to move permanently to the Berkshires to find a quiet solitude in which to write. Melville thought of the beautiful view of Mount Greylock from the Melvill farm, and soon purchased the neighboring farm which commanded a similar view. He named the farm Arrowhead after the native relics he discovered as he was plowing the fields. The home would remain his for the next 13 years, and there he would write some of his finest works.

The rambling old farm house became the home for Herman, Lizzie, Malcolm, and three more children, all born at Arrowhead: Stanwix, Bessie, and Fanny. Herman’s mother Maria and his sisters Augusta, Helen, and Fanny all moved to Arrowhead as well. Sister Kate and numerous other friends and relations would make their home there as well at various times. It was a busy, chaotic household.

Herman created a refuge from this chaos in his second-floor library. Keeping to a regular writing schedule, he completed four novels, a collection of short stories, and 10 magazine pieces, as well as beginning work on a volume of poetry. The works Melville wrote at Arrowhead included Moby-Dick, Pierre, The Confidence-Man, Israel Potter, a collection entitled “The Piazza Tales,” and such short stories as “I and My Chimney,” “Benito Cereno,” “Bartleby the Scrivener,” and “The Paradise of Bachelors and the Tartarus of Maids.”

Arrowhead influenced him greatly in his writing. The view of Mount Greylock from his study window, the one that brought him to Arrowhead, was said to be his inspiration for the white whale in Moby-Dick. He dedicated his next novel, Pierre, to Mount Greylock. His short story, “The Piazza,” begins at Arrowhead and takes a magical journey to the mountain.

Melville incorporated features and aspects of Arrowhead into several stories. The piazza, after which the story and the book “The Piazza Tales” were named, is a porch Melville added to the north side of Arrowhead shortly after he purchased the property. Visitors can still stand on that porch and look at the same view Melville had when he spent hours there in his rocking chair.

Now, for a house, so situated in such a country, to have no piazza for the convenience of those who might desire to feast upon the view, and take their time and ease about it, seemed as much of an omission as if a picture-gallery should have no bench; for what but picture-galleries are the marble halls of these same limestone hills?—galleries hung, month after month anew, with pictures ever fading into pictures ever fresh. – Melville in “The Piazza.”

The story “I and My Chimney,” published in Putnam’s Monthly Magazine in 1856, contains one of the most complete descriptions there is of Arrowhead during the Melville occupancy. The story is a fictitious account of the efforts of a wife to remodel an ancient farm house by replacing the central chimney with a grand hallway. Melville used Arrowhead as a model for the house, and the story is filled with accurate descriptions.

It need hardly be said, that the walls of my house are entirely free from fire-places. These all congregate in the middle—in the one grand central chimney, upon all four sides of which are hearths—two tiers of hearths—so that when, in the various chambers, my family and guests are warming themselves of a cold winter’s night, just before retiring, then, though at the time they may not be thinking so, all their faces mutually look towards each other, yea, all their feet point to one centre; and when they go to sleep in their beds, they all sleep round one warm chimney[.]

So proud of this story was Herman’s younger brother Allan, who moved into Arrowhead after his brother moved out, that he had inscribed on the chimney itself text from the story. The text remains for the visitor to see, along with an original copy of the story.

The beauty which surrounds the property also made its way into Melville’s works. The the first chapter of the novel Israel Potter includes a lyrical description of the area surrounding Arrowhead. (Visitors can see this same view from the Nature Trail on the property.)

In fine clear June days, the bloom of these mountains is beyond expression delightful. Last visiting these heights ere she vanishes, Spring, like the sunset, flings her sweetest charms upon them. Each tuft of upland grass is musked like a bouquet with perfume. The balmy breeze swings to and fro like a censer. On one side the eye follows for the space of an eagle’s flight, the serpentine mountain chains, southward from the great purple dome of Taconic—the St. Peter’s of these hills—northwards to the twin summits of Saddleback, which is the two-steepled natural cathedral of Berkshire; while low down to the west the Housatonic winds on in her watery labyrinth, through charming meadows basking in the reflected rays from the hill-sides.

Melville lived, farmed, and wrote at Arrowhead for 13 years. But during that time, although he was writing his best work, he was not making a living from his writing.

Melville’s family life was punctuated with moments of joy and with difficulties. His four children enjoyed the bucolic life in Pittsfield, although Lizzie had difficulty with her hay fever and frequently took trips back home to Boston. As much as Melville loved the Berkshires, he grew frustrated at the lack of success of his writing career and found his debts mounting. With family pressures to find gainful employment, and during the disruptions of the Civil War, Melville decided it was time to move his family from his beloved farm and return to New York City. There he found work as a customs inspector at the New York Customs House, a job he held for over 20 years, working six days a week with only two weeks of vacation a year. The man who had sailed the world and written the greatest of American literature now found himself confined to a desk job that paid four dollars a day.

Melville sold Arrowhead to his brother Allan, who used it first as a summer home and then moved there permanently. Melville continued to visit Arrowhead through the 1880s. The Melville family owned the house until 1927. In 1975, the Berkshire County Historical Society purchased the house and began its restoration.

Melville stopped writing prose almost entirely for the rest of his life, turning to poetry and self-publishing five volumes before his death in 1891. In 1886 he presented Lizzie with a book of poetry entitled Weeds and Wildings, Chiefly, with a Rose or Two. Many of the poems were about happy days at Arrowhead. His final work was Billy Budd, the only prose he had written since 1857; it was not published until 1924, 33 years after Melville’s death. 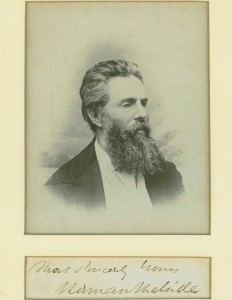