Melville was born in New York City in 1819 to a family with deep roots in America. His mother, Maria Gansevoort Melville, was the daughter of General Peter Gansevoort of Albany, dubbed the “Hero of Fort Stanwix” due to his role in the defense of that fort in Rome, New York, during the American Revolution. The Gansevoorts had come to the new world in the 1600s and established themselves as one of the first families of Dutch Albany.

Melville’s father, Allan Melvill, was from a prominent family in Boston. Allan’s father, Thomas Melvill, also had a revolutionary pedigree, participating in the Boston Tea Party and serving a major in General Washington’s army. Washington later appointed Thomas Melvill Commissioner of Boston and Charlestown Harbor, an appointment reaffirmed by Presidents Adams, Jefferson, and Madison. It was Thomas Melvill who first bought property in Pittsfield, Massachusetts, in 1816, for his son Thomas.

After Allan Melvill and Maria Gansevoort married in 1814, Herman’s parents settled in New York City and begun their ascent in New York society. Allan sold fine imported goods. Young Herman’s world was one of servants and dancing schools. When Herman was only 11, however, Allan went bankrupt, forcing the family, which now included eight children, to flee the creditors and move to Albany. Just two years later, Allan Melvill died, leaving his widow with eight children under the age of 17. Herman and his older brother Gansevoort were pulled out of school in order to help support the family.

In 1832, Herman Melville (after Allan’s death, Maria added an “e” to the family name) made his first visit to Pittsfield to visit his Uncle Thomas who lived in the house owned by Major Thomas Melvill. Herman fell in love with the Melvill farm and spent many happy hours there working and hiking the land. His visits there would continue until 1850, when Melville decided to move his family to Pittsfield permanently.

In the years after Allan Melvill’s death, Herman received only sporadic educational instruction and he struggled to find a vocation. He worked as a bank clerk, a clerk in a cap and fur store, and a schoolteacher in Pittsfield and in New York State. He took a surveyor’s course and went west hoping to find a job. He also did a stint in the merchant marine in 1839, sailing to Liverpool, England on the regular trader St. Lawrence as a “boy.”

In 1841, Melville signed on the whaler Acushnet and set sail from Fairhaven, Massachusetts, on a three-year whaling voyage. He jumped ship in the Marquesas Islands, motivated to leave by an unpleasant captain, and spent four weeks among the natives before boarding other ships to Tahiti then Hawaii.  Eventually Melville joined the United States Navy, sailing home on the frigate United States.  On this trip Melville honed his story-telling skills, and when he arrived home in 1844, he was ready to take up a pen for a career in writing.

After settling back with his family in Lansingburgh, New York, outside Albany, Herman began to write down his stories . The result was five books all drawing on his experiences at sea. Typee (1846) was based on Melville’s adventures after jumping ship in the Marquesas Islands; its sequel was Omoo (1847), set in Tahiti. Mardi (1849) was a South Seas fantasy. Redburn (1849) was a semi-autobiographical account of Melville’s days in the merchant marine, and White-Jacket (1849) told the tale of life on a U.S. Navy man-of-war.

Melville enjoyed moderate success with these novels and was now an established member of the American literary scene. He had also won the heart and hand of Miss Elizabeth Knapp Shaw of Boston, the daughter of an old family friend, Lemuel Shaw, Chief Justice of the Massachusetts Supreme Judicial Court. The young couple married in 1847 and settled in New York City.

In 1850, Herman, Lizzie, and their baby son Malcolm spent the summer in Pittsfield at the Melvill farm. Herman was inspired by the beauty of the region, particularly the view of Mount Greylock, highest point in Massachusetts, from the farm house window. He was working on a story about the whale fisheries as well as writing some literary reviews for a friend’s magazine when he was invited to go on a picnic to Monument Mountain, just south of Pittsfield. Also invited on the excursion were two other literary notables: Oliver Wendell Holmes and Nathaniel Hawthorne, both Berkshire residents. Melville and Hawthorne met for the first time and struck up an instantaneous close friendship. 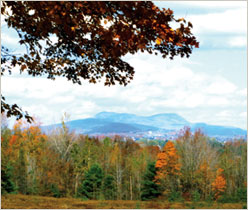