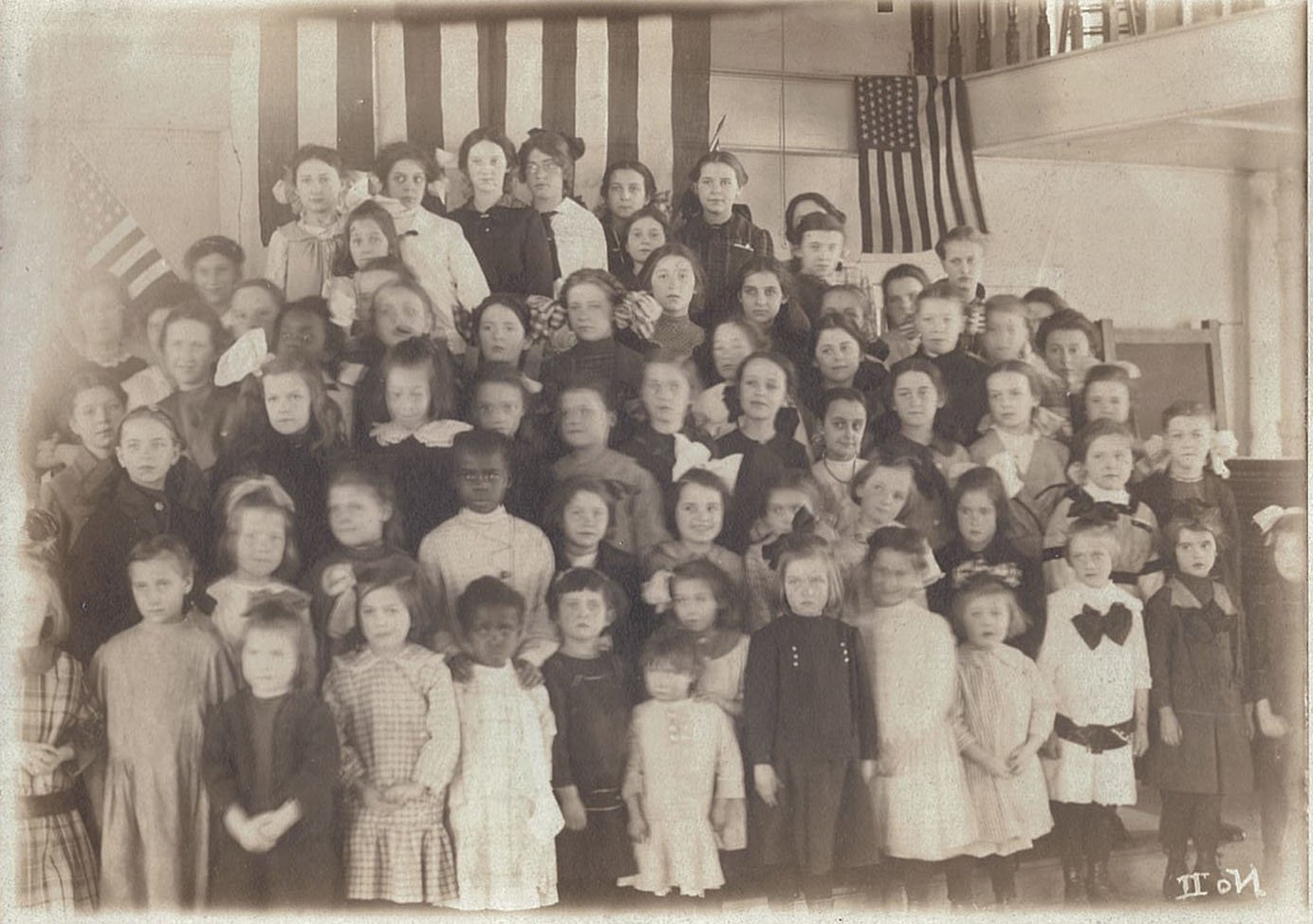 These recordings are also available on the Berkshire County Historical Society YouTube Channel.

Anita came to Pittsfield in 1947 with her husband who got a job with GE. They lived in Pittsfield and Dalton and had 3 children. Anita worked at Crane & Co, painting borders on stationary. She was an active member of St. Stephen’s Episcopal Church.

Elizabeth, nicknamed “Tubby,” was born in Pittsfield and graduated from Pittsfield High in 1949. She attended St. Luke’s Nursing School, and worked as a nurse there. She had 13 children, and was instrumental in setting up medical clinics in Detroit.

Interviewed at age 64, Emma was born in Pittsfield at St. Luke’s Hospital on August 30, 1933.  Was an only child.  Father born in Boston and brought to Pittsfield as a child of the state. Mother born in Stephentown, NY.  Parents were married and lived in Pittsfield. Attended Bartlett School, Tucker School, and Pittsfield High School. Was active on several school committees, sang in glee club, and played basketball.  Played in the neighborhood with all races of children. Graduated from Pittsfield High School in 1952. Worked as an LPN at Berkshire Medical Center, as a nurse’s aide, and at a pajama factory in Pittsfield. Married Lawrence Caesar, a winder at General Electric in Pittsfield. Was a little active in the NAACP, but primarily involved in the church. Religion played a large role in her life. Church affiliation was with Second Congregational Church and later with the Christian Assembly Church. Sang in the church choir and performed cantatas.

Rosemary was of Portuguese, Native American and African American ancestry – the name Persip is Portuguese. She speaks about growing up in Pittsfield in a neighborhood with Polish, French, Black, Italian, and no one cared where you came from at that time. She was outspoken and wanted to be treated like anyone else – she really didn’t face discrimination growing up, and remembers others picketing at Woolworth’s and walking right past them. She married in 1947 and worked as a nurse at St. Luke’s, and was a member of the First Baptist Church.

Interviewed at age 81, Frances was born on December 31, 1916 in Pittsfield, both her parents and grandparents lived in Berkshire County. One of 9 siblings. Sister is Edythe Reid. Didn’t finish school. Domestic service, worked for Norman Rockwell. Gave family half of her earnings. Helped father with his catering business and ran café at Hancock Shaker Village for 7 years. Lived in several houses on the west side of Pittsfield. Active Black community and large extended family. All races of kids played together. Married with two children. First Baptist Church played a big role in their lives growing up – church suppers, etc., NAACP, Christian Center used to be the Epworth Mission.

Born in Connecticut, one of eight children, came to Pittsfield in 1957 when he was 22 years old. His father was a pastor with the AME Zion church. Willard served in the Air Force in WWII, and only after he returned from the war did he feel called to the ministry. He married in 1958, they lived in CT for a year and then lived in Pittsfield. Briefly worked for GE, then attended UMASS, BCC and Goddard College and was involved in community action agencies such as Head Start. He then apprenticed and received his ordination in early 1970s and helped to start the AME Zion Church in Pittsfield. He was pastor there beginning in 1973 at the same time as he was the director of the Christian Center.

As nurse and public health administrator, Florence Edmonds served her community for more than 50 years, both professionally and in a volunteer capacity. Born, raised, and educated in Pittsfield, Mass., Mrs. Edmonds was refused nurses’ training at the local hospital. In 1917 she enrolled in a three-year course at Lincoln Hospital and Home Training School for Nurses in New York City. Upon its completion, she was awarded a one-year scholarship to Teachers’ College at Columbia University to study hospital social service. She then worked at the Henry Street Settlement, a visiting nurses service. She married William Bailey Edmonds in 1922, and returned with him to her hometown of Pittsfield, where they raised their four children. During World War II, she taught Red Cross home nursing classes, and in 1945, she joined the Pittsfield Visiting Nurse Association where she remained for 11 years. She served as secretary to District One of the Massachusetts State Nurses Association, and was health coordinator and part-time instructor in home nursing at Pittsfield General Hospital from 1956 until 1968 when the affiliated nursing school closed. An active church member and volunteer in community activities, Mrs. Edmonds was named “Mother of the Year” in 1962 by the townspeople of Pittsfield.

The following material can be found at Black Women Oral History Project Interviews, 1976–1981

Came to the Berkshires when she was fourteen years old, and graduated from Searles High School in 1946. She felt Great Barrington held no attraction for teens in those days, but Pittsfield did, in fact she thought it was a big city. Ruth recalls experiencing racism in Great Barrington, both in town and in school. Her father was disabled, having been injured during WWI, and her mother was “ambitious,” owning a tea room and an employment agency. Her mother also started the Macedonian Baptist  Church in Great Barrington. Ruth graduated from St. Luke’s Hospital School of Nursing in 1951 and worked as a nurse for 37 years. Ruth married Thomas Evans from Pittsfield in 1953 and had four children.

Audio Transcription: Ruth Evans
(NOTE: some portions of the audio are inaudible)

Both his parents were born in Massachusetts – Lee and Stockbridge. He grew up in Pittsfield and attended public schools in the city, graduating from Pittsfield High School in 1941. He was part of a church group called the Young People’s Society associated with the Second Congregational Church. The group’s name was changed to the Lucky Sevens to organize dances and parties (before WWII). He joined the Army in 1943, after be rejected as an Air Force Cadet, though he passed the exam. Once out of the service in 1946, he worked for GE – one of only three African-Americans to work there at the time. His mother worked for GE during the war. After 9 years at GE, he wanted a job that would allow him to work outdoors, so we worked at some camps, and then in construction. He married Esther Jones in 1949 and had 3 children and 9 grandchildren. His wife worked for England’s her entire adult life. Evans was active in the VFW in old age.

Interviewed when she was 88 years old, Minnie recounts how her parents were Schaghticoke Indian and a “mulatto” (mother had a black father and a French mother) who grew up in Sharon, CT. She recalls how her elementary school was burned down and she was only one of three “race kids” as she called them. She came to Sheffield, MA in Berkshire County as her husband had grown up here. Other family members of hers were raised in the white community and they didn’t want to be mingled with them, so she didn’t know them. She worked in the service industry, and as a nanny and had 9 children.

Clarence was born in Torrington, CT but moved to Stockbridge when he was a year and a half. His paternal grandparents also lived in Stockbridge. He worked during the summers when he was a teen, caddying at the local gold club. His family lived at 27 Rossiter Street in Great Barrington. Clarence graduated from Searles High School in Great Barrington and was drafted to the army right after graduation and fought in WWII. Clarence married Elaine in 1951, a teacher, and they had five children. They were members of the A.M.E. Zion Church.

Wray was born in Atlanta, GA though his family can trace its lineage to pre-Revolutionary War Stockbridge, directly descended from Agrippa Hull, aide-de-camp to Polish General Thadeus Kosckiusko. Wray attended Lee Central School for 6th and 7th grades, an integrated school. He graduated U Mass in 1952 at which time got a job as a lab technician at New England Lime Company in Canaan, CT, eventually was chief chemist when Pfizer took over the company in 1962. Over the years, Wray has served on many boards, including the Board of Antidiscrimination, part of the NAACP Berkshire branch, the Mental Health Board, Lions Club, Sheffield Planning Board and he is an active member of the Clinton AME Zion Church in Great Barrington.

Margaret’s parents were both from North Carolina but they met in Williamstown, MA. Margaret’s family attended the Methodist Church and they were the only black family in their neighborhood. Childhood summers were spent in North Carolina. She was a teacher for 40 years, started her teacher training North Adams Normal School (now MCLA), and was a student teacher in several towns in the Berkshires and Indiana. She studied for her master’s in teaching during summers at Columbia University. She also remembers being at Hart Camp in Williamstown, which was founded in 1947 by her brother, Thomas, as a camp for minority youth to experience the outdoors. She then came back to teach special education in Pittsfield.

Audio Transcription: Margaret Hart (May 2000)
(NOTE: some portions of the audio are inaudible)

Betsy came to U.S. at 15 years old in 1913 from Germany. She came alone through New York to join her siblings, then lived with her sister and worked in a textile mill. It took her two years to become a US citizen. Her father came to U.S. to be with the family, as her mother had died during WWI. She married Max Bookless in 1919 who was a milkman. They had 4 children and 9 grandchildren. Betsy organized groups to provide relief for other Jews, they were long-time members of the Linden Street shul, which became Knesset Israel. Later in life she married Max Katz.

Audio Transcription: Betsy Katz
(NOTE: some portions of the audio are inaudible)

Rozena born in Birmingham, Alabama. Her mother, a college graduate, was from Mississippi. Her father from Alabama. Rozena’s mother came alone to Berkshire County to teach at the Foxhollow School in 1944, Rozena following in 1946. I n 1949 at 16, she graduated from Pittsfield High. She recalls separate dances for white and Black students. Rozena played sports – field hockey, baseball, basketball. She actively contributed to the family finances with after school jobs. After graduation, she waited tables and worked as a chambermaid in various hotels. Two of her brothers worked for GE. Her grandmother lived with them. Rozena married twice and had nine children. She called herself an activist and was active on many boards, helping others. She loved to travel, learning to drive at 17.

Born in Pittsfield in 1935, his mother and father moved to the Berkshires in the 1920s from Pennsylvania and North Carolina. His grandmother came to live with them. His father came for work, as did many Black men at the time, to work at the Wendell Hotel. Young Black men would live with other Black families in town. His father also worked at the Pittsfield Bus Station and at England Brothers Department Store. His father eventually left his mother with six children to feed. James went to Briggs School, and experienced racism throughout his school career. He shined shoes on North Street and had a paper route to make money, which he gave to his mother. He played a variety of sports at the Boys Club. Although he did not graduate from high school, all of his own children did and they went on to college. He served three years in the Air Force in peacetime England. He married Lois Fry and had 3 children, though they amicably divorced after 23 years. He worked overnight at a hospital all while starting an appliance business. Appliance World opened in 1967 and was a mentor for young disadvantaged youth in a business program. James and his family were active members at both St. Stephens and Second Congregational Church.

The Berkshire Historical Society has additional recordings for this project but the quality of those recordings are predominantly not audible.  They are available upon request.  The recordings are of the following individuals: