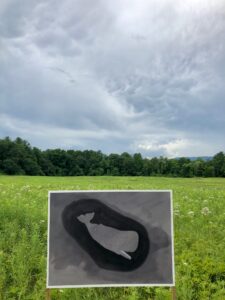 Jim Jasper’s Moby Dick is a chapter-by-chapter interpretation of Herman Melville’s Moby-Dick; or, the Whale in 140 drawings. Melville’s novel contains numerous references to art, ranging from scientific illustration and nautical folk art to Turner seascapes. Jasper’s pictures draw on these visual sources to convey the breadth of the book, which encompasses an adventure, a whaling manual, a natural history, and a queer love story.

Moby-Dick was published in 1851, a year after Herman Melville and his family moved to Arrowhead. As he wrote, Melville found inspiration in the Berkshires and its landscape, which he had been drawn to since he was young. He came to see the commanding view of Mount Greylock, visible from his study window as he wrote, as resembling the back of a sperm whale. The snow-covered peaks became his white whale, echoing the title creature in his novel.

A selection of Jim Jasper’s Moby Dick series is exhibited here, in the shadow of Mount Greylock, at the home which meant so much to Melville. Like Melville, Jasper was born in New York City, and he now lives in Norfolk, Connecticut. Watch for an upcoming Jim Jasper collaboration with the Berkshire Museum incorporating other pieces from Moby Dick. The full series of drawings can be viewed at jimjasper.com. 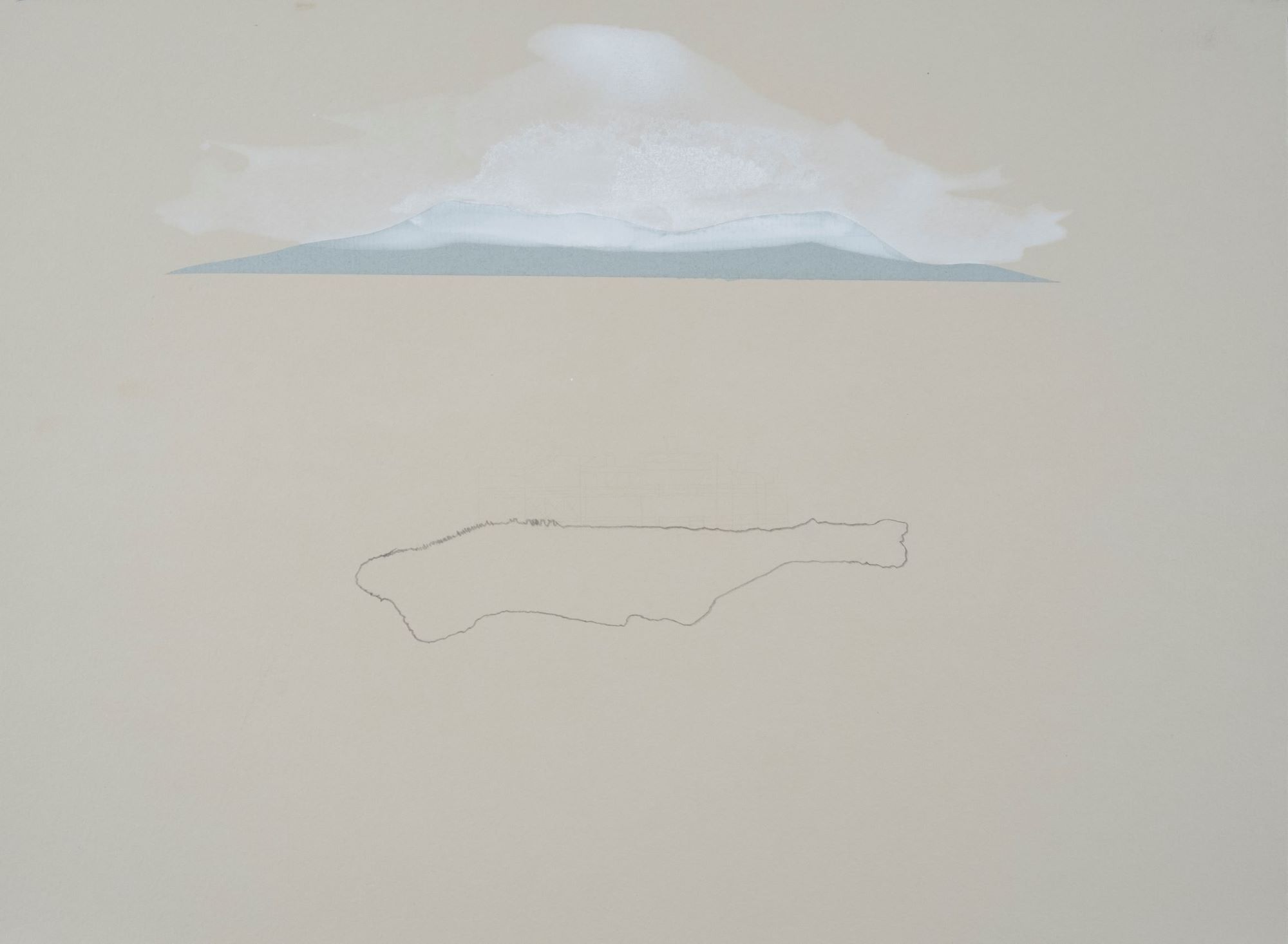 “This first chapter of Moby-Dick starts with a description of Manhattan, ‘belted round by wharves as Indian isles by coral reefs,’ and ends with the first description of the white whale, Moby Dick, ‘one grand hooded phantom, like a snow hill in the air.’ In ‘Loomings,’ Ishmael decides to leave Manhattan and go to sea. Melville himself, on a somewhat parallel course to his hero, leaves Manhattan at around this time to pursue his novel, Moby-Dick, in the Berkshires. I see the ‘snow hill in the air’ as Mount Greylock, and read the chapter as Melville’s declaration of dedication to his new home.

The outline of Manhattan in this drawing is from a nineteenth century map, and the mountain silhouette is Mount Greylock from the vantage point of Melville’s study.” 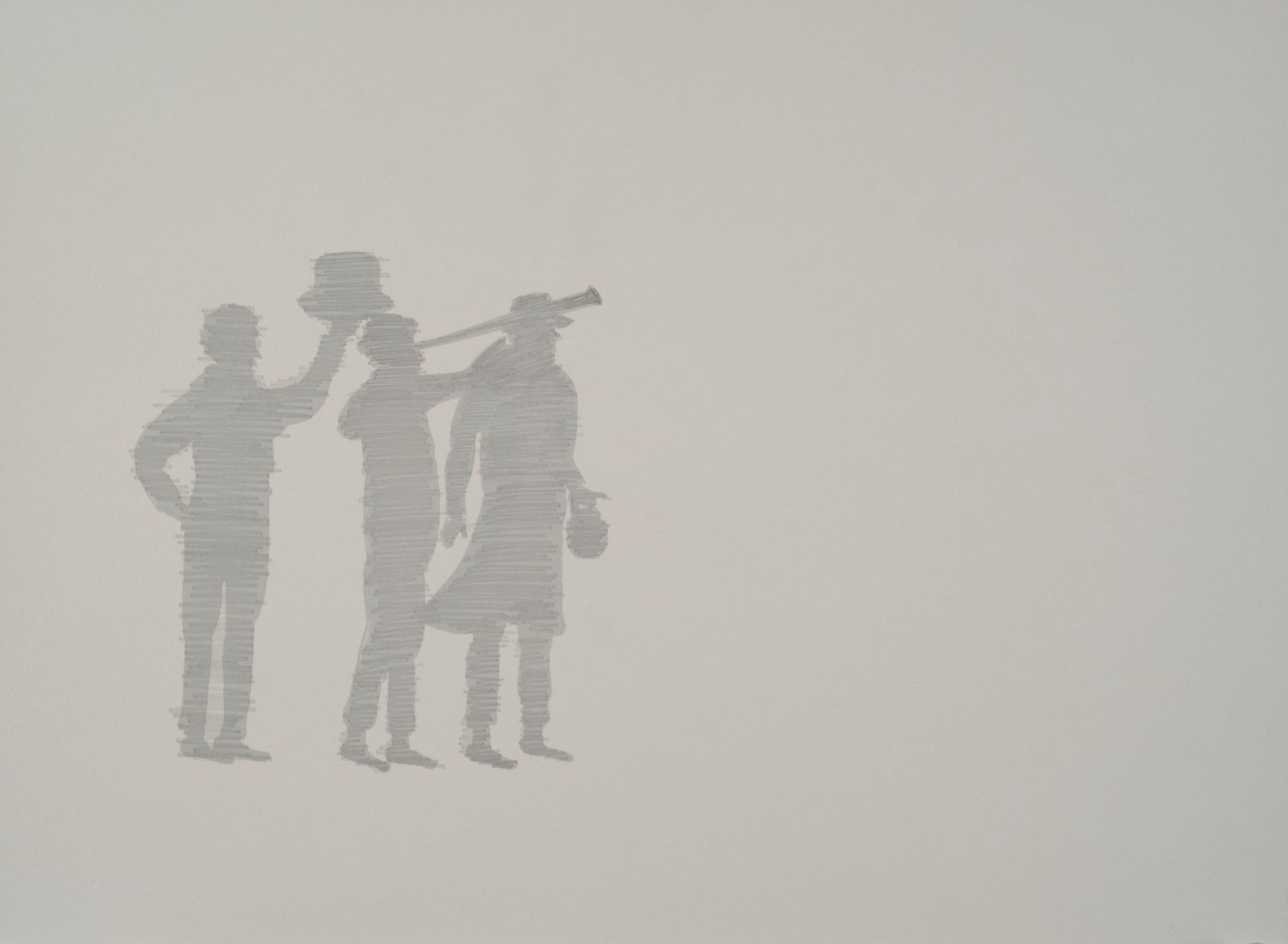 “Ishmael, on the way to board the Pequod, notices a group of sailors running toward the ship. It’s a ‘grey imperfect misty dawn,’ and Ishmael can’t be sure what he has seen. These phantom sailors, having stowed away for much of the voyage, materialize much later as Ahab’s private Moby-Dick-hunting crew.

There are many references in Moby-Dick to the ethnic diversity of the sailors on the Pequod and other ships and in whaling ports like New Bedford and Nantucket. The descriptions of these exotic characters are often stereotypical. This drawing flips the perspective. It is based on a depiction of Western sailors in a Japanese scroll in the collection of the New Bedford Whaling Museum.” 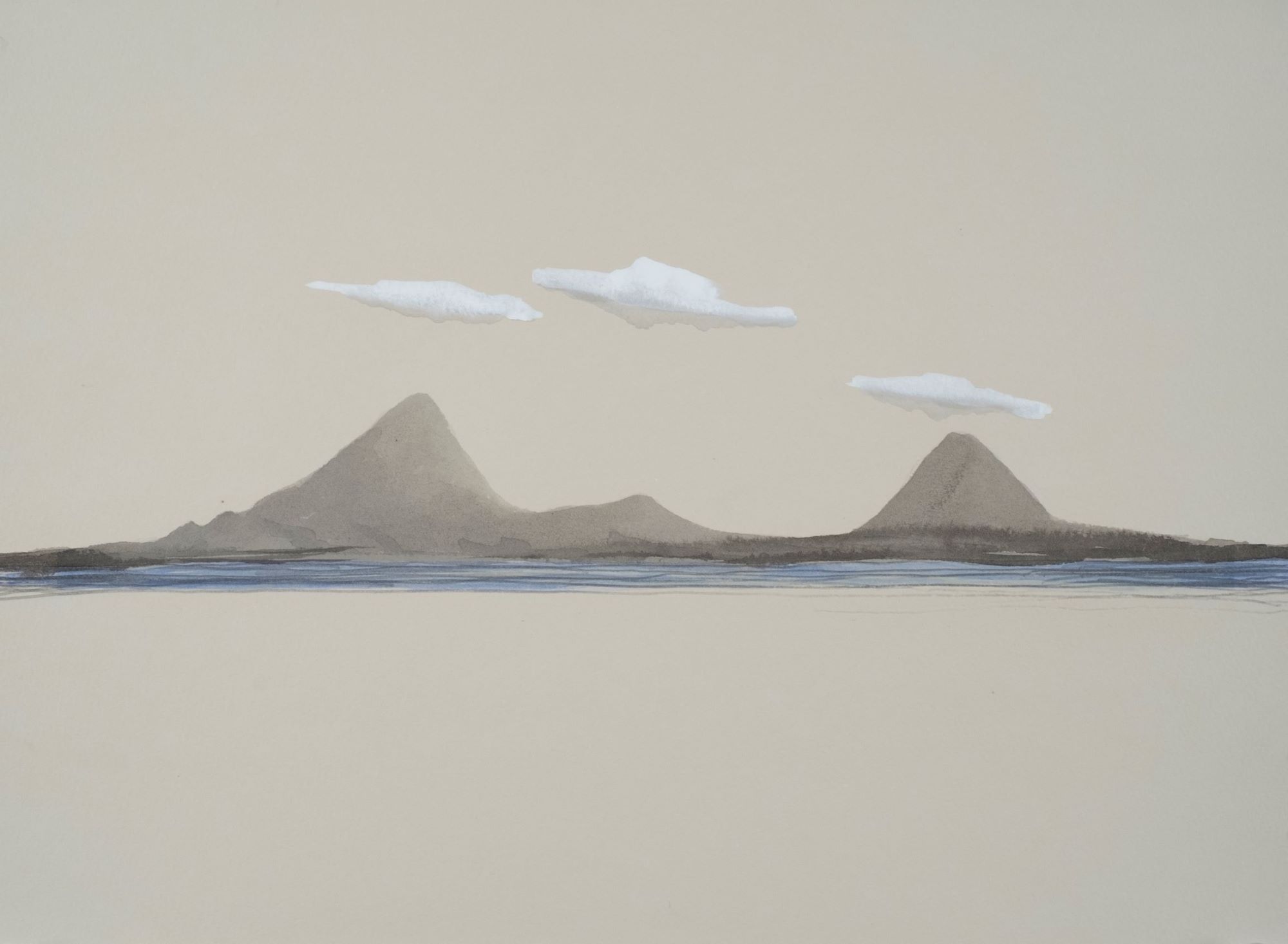 “Exploring and documenting previously unknown islands was a critical function of whaling ships in the nineteenth century. Navigation was rudimentary. Knowing, even roughly, the location of the nearest island and whether it had fresh water or other resources, friendly or hostile inhabitants, could be life-saving. So ship captains kept highly detailed logs, which contained illustrations like this one, of land masses they encountered, along with their coordinates. Whaling captains had access to journals and charts from other ships as well as their own charts and logs from other seasons, and used these to predict where they might find pods of sperm whales.” 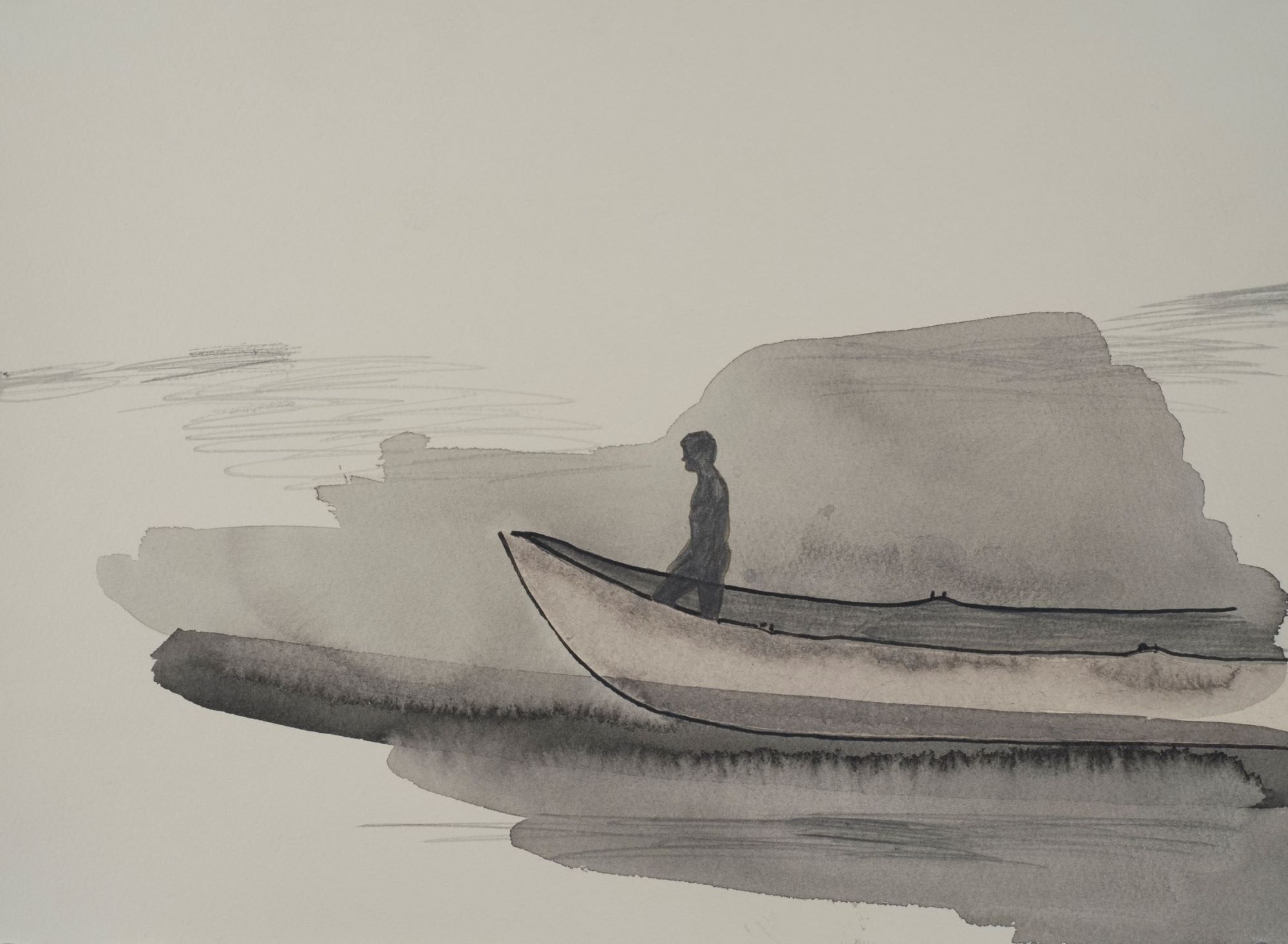 “Melville explains that when whaling ships encounter each other by chance at sea, after hailing each other from their respective ships, captains habitually exchange visits on one of the ships. When the captain is conveyed by whale boat to the other ship he stands in a dignified manner, but precariously, since there is no seat astern. Ahab does not actually board the Goney (Albatross), the first in a series of ships met by the Pequod, probably because he has confirmed in the hailing process that the Goney has not sighted the white whale.” 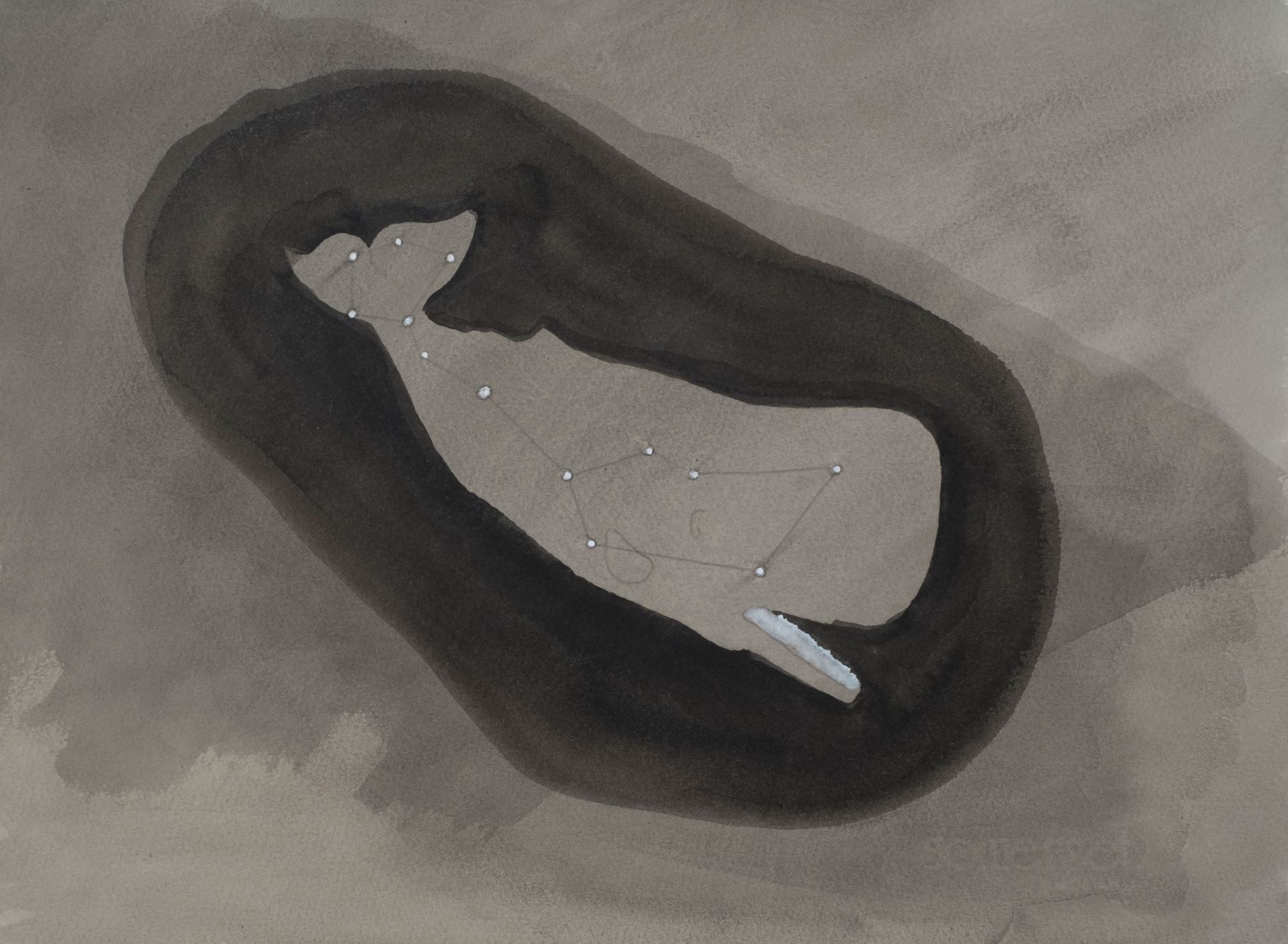 Jim Jasper, Of Whales in Paint; in Teeth; in Wood; in Sheet-Iron; in Stone; in Mountains; in Stars, 2019 Ink on Paper

“Melville continues his essay on the depiction of whales, opening the discussion to folk art and product design, and finally imagined whale forms in landmasses and, ecstatically, the stars: ‘…beneath the effulgent Antarctic skies [sailing in the Big Dipper] I have… joined the chase against the starry Cetus far beyond the utmost stretch of Hydrus and the Flying Fish.’ This drawing shows the constellation Cetus, the whale.” 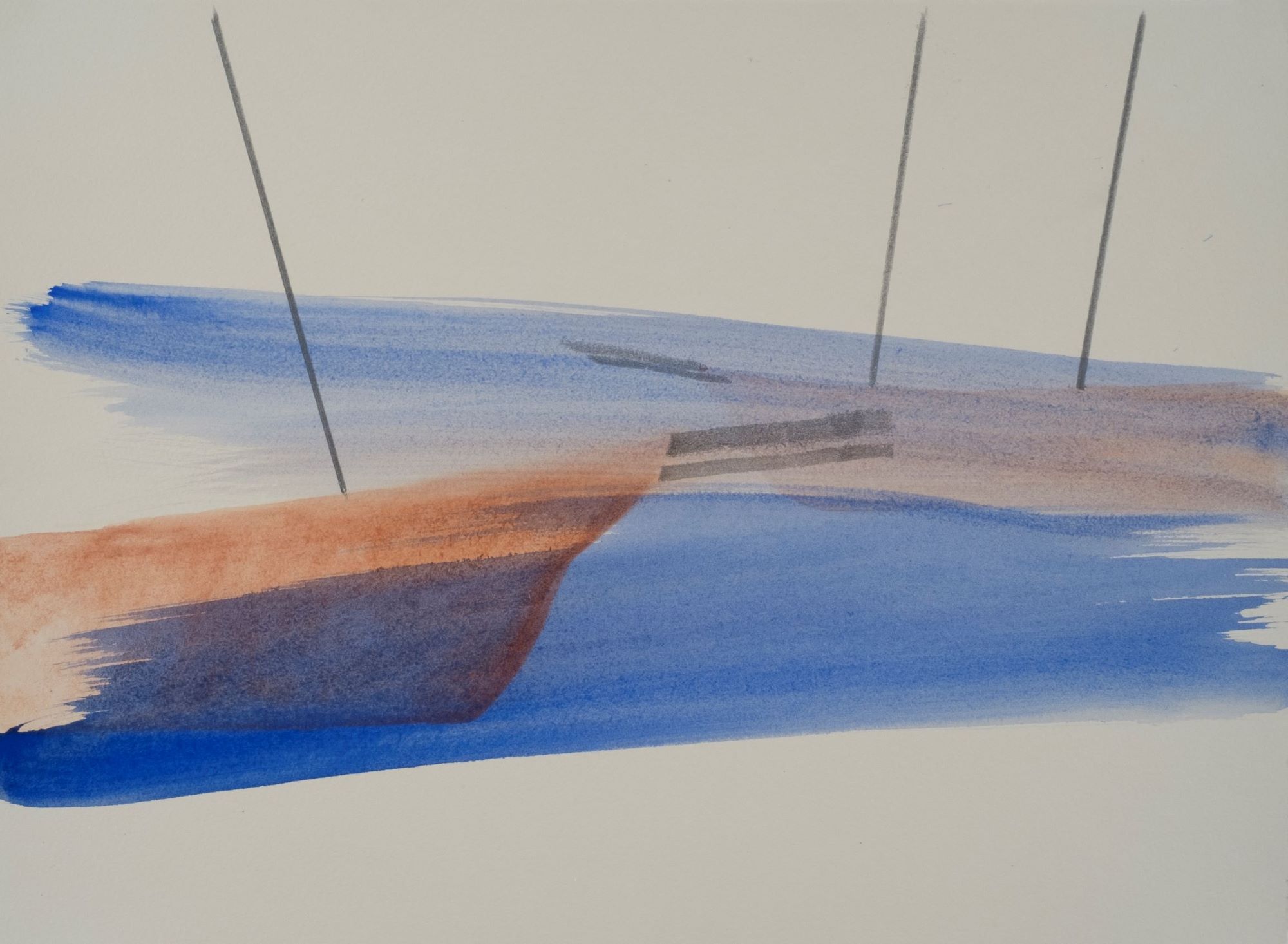 Jim Jasper, The Pequod Meets the Bachelor, 2019 Ink on Paper

“Though this is a comic chapter, the contrast between the two ships is stark. The Pequod, since Ahab has been single-mindedly pursuing Moby Dick, is almost empty of oil, and the crew is distraught. The Bachelor, heading back to its home port, is festooned with flags and the sailors are rejoicing, wearing red bunting in their hats. Every available receptacle on the Bachelor is full of oil. ‘Everything was filled with sperm, except the captain’s pantaloon pockets, and those he reserved to thrust his hands into, in self-complacent testimony of his entire satisfaction.’” 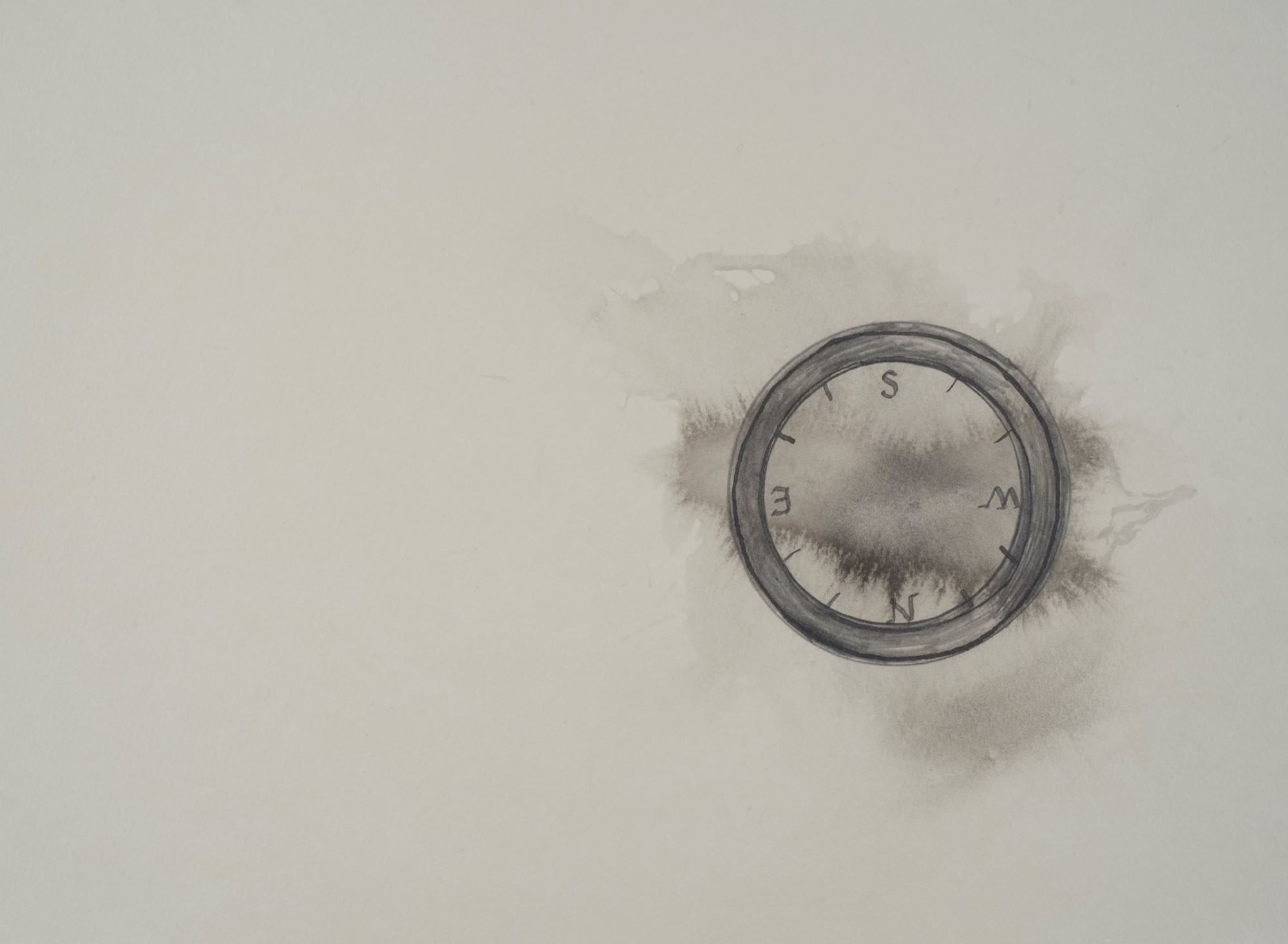 “Ahab gradually detaches himself from everything except the pursuit of the white whale. First, as if denouncing pleasure, he throws his pipe overboard. Then, as if denouncing reason, he destroys the ship’s quadrant, its navigation system. Now the compass needle has been lost — reversed during a dramatic electrical storm, and Ahab crafts his own replacement in front of the crew in a theatrical display of his power. ‘In his fiery eyes of scorn and triumph, you then saw Ahab in all his fatal pride.’ Soon the life buoy will fall into the sea; then Ahab’s hat will be taken by a bird; and when Moby Dick finally appears all will be lost.”